And Now A Word From The Panel: 2014 JPML Practice Trends

Welcome as we enter our third year of “And Now a Word from the Panel,” a column that rides the circuit with the Judicial Panel on Multidistrict Litigation as it meets on a bimonthly basis at venues around the country.

With winter in full gear and a blizzard pounding the Northeast, the panel once again heads south. This year, the panel returns to its more traditional January location in (hopefully) sunny and warm Miami, Florida. This is a shift from last year’s planned January venue of New Orleans, which was hit with a snow and ice storm, resulting in a rare JPML “snow day” and postponement of the January hearing until the first week of February.

At the December hearing session in Charleston, South Carolina, the panel considered the second attempt by a distributor of dietary supplements to create an MDL proceeding, with the exciting possibility of the first Hawaii MDL proceeding in nearly 20 years. But before looking at how the panel ruled on that motion, we take a broader look back at 2014. Specifically, what JPML trends did we see over the past year and how do those compare with prior years?

Generally speaking, and as reflected in the chart below, 2014 was remarkably similar to 2013:

Looking beyond the raw numbers and at one of this column’s favorite topics, what did we learn in 2014 about the panel’s selection of MDL venues and the factors that it considers in selecting these venues?

A map depicting the states in which the new MDLs reside is below: 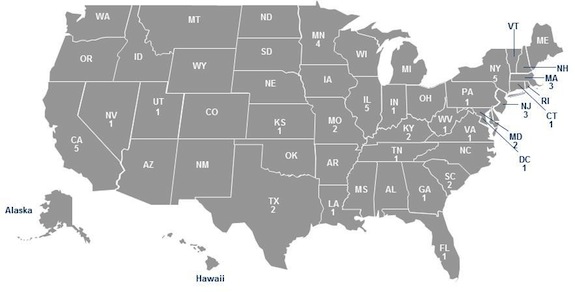 The factors used by the panel to decide the locale of new MDL proceedings are also similar to those used in prior years, including, but not limited to:
In what appears to be a new 2014 venue selection factor for a products liability MDL, the panel recently chose a venue based on that district having the “broadest based complaint” of alleged defects.[2]

Looking Back: If at First You Don’t Succeed, Try, Try Again (redux)

The December hearing once again presented the question as to when the panel will, or will not, create an MDL where it previously denied a motion to create an MDL for similar cases. In re Oxyelite Pro and Jack3D Products Liability Litigation (No. II) (MDL No. 2582) (J.P.M.L. Dec. 12, 2014). In April of 2014, the panel rejected the initial MDL application finding differences in the health risks and regulatory responses at issue in the various actions. The panel also noted that the class actions at issue raised unique issues relating to a prior state court class settlement agreement.

In its renewed application before the panel, the defendant distributor of the supplements (involving two lines of its products) argued that changed circumstances since its prior application warranted MDL centralization of 16 actions with a total of 45 plaintiffs in five different districts, with a few potential tag-along actions. Moreover, the movant excluded the class actions from the MDL petition. The panel was not persuaded. In denying the motion and the possibility of an MDL proceeding in Hawaii, the panel considered the following factors:
The takeaway for practitioners is that while the panel may grant second chances to create an MDL and as the panel has noted in the past, there must be a significant change in circumstances to warrant a different result. In Oxyelite, the movant failed to make the showing. In fact, nothing much had changed. There was still essentially the same number of actions in relatively few judicial districts. Moreover, the same lack of commonality among the actions that was initially found remained true months later.

What lies ahead in 2015 for the panel? Will there be other second attempts to create an MDL proceeding? Will the number of overall MDL proceedings remain stable in the new year or will the number of new MDLs outpace those that are terminated? What types of cases will be best suited for MDL treatment? What new issues will make their way to the panel at the next hearing session? Stay tuned for our March edition of "And Now a Word from the Panel" as for the seventh year in a row, the panel heads to a March hearing in San Diego, California — “America’s Finest City.”

Who was the first panel chairman?

The Honorable Alfred J. Murrah of the Tenth Circuit who served as the panel chairman from May 1968 until October 1975.

For the years 2013-14, which federal district was assigned the most new MDL proceedings?

Like to venture a guess as to this month’s trivia question? Have tidbits of panel trivia that you would like to be featured in an upcoming column? Please do not hesitate to drop me a note at alan.rothman@kayescholer.com.
» Read the full article on Law360 (subscription required).
Share this with others:
Find more content tagged: