Law360, New York (September 27, 2016, 12:49 PM EDT) -- The U.S. Environmental Protection Agency is poised to begin exercising its expanded regulatory authority over the makers and users of chemical substances pursuant to recent amendments to the Toxic Substances Control Act. In addition to issuing proposals in the near term for key procedural rules the agency must promulgate not later than June of 2017, the EPA may soon publish proposed rules regulating uses of specific chemical substances under Section 6 of the TSCA.

When doing so, the EPA will rely on revisions Congress made to the TSCA to ease legal and procedural requirements which have hampered agency efforts for years. The EPA also has begun shedding light on which substances are likely to be targeted for expedited regulatory actions the new legislation requires the EPA to take on persistent and bioaccumulative substances.

The TSCA provides the EPA broad authority to regulate importers, manufacturers and processors of chemical substances, including authority to regulate commercial and consumer use products into which such substances are blended. In June 2016, the TSCA was significantly amended following years of legislative efforts and months of protracted bipartisan negotiations.1

Among the highlights of the amendments are new statutory requirements directing the EPA to "prioritize" chemical substances for "risk evaluation."2 Further, the amendments specify that the EPA must take regulatory actions to mitigate risks from activities determined to present an "unreasonable risk" to human health or the environment.3 An initial list of 10 substances to undergo the first such risk evaluations will be selected from the 2014 "work plan" chemicals list by mid-December 2016.

Still, other chemicals listed on the work plan which are persistent, bioaccumulative and toxic substances (PBTs) will be given preference in the prioritization process4 and could be subject to expedited regulatory actions within three years if the EPA finds that uses of the substance cause exposure to the general population, a potentially exposed or susceptible subpopulation, or the environment.5

The EPA is fast at work drafting proposals for procedural rules to be released in December that will establish the risk prioritization, risk evaluation and fee structure the agency will establish to implement the central features of the Section 6 amendments.6 While these procedural matters are developing, a recent action was taken by the EPA that should not escape notice.

The newly added TSCA Section 6(h) requires the EPA to take "expedited action" on certain work plan chemical substances the EPA has a reasonable basis to conclude are toxic and has determined to be persistent and bioaccumulative. Candidate chemicals also must have been shown through an EPA exposure and use assessment to be likely to cause exposure, under the conditions of use, to the general population, to a potentially exposed or susceptible subpopulation identified by the administrator, or to the environment.7

Without fanfare in September, the EPA added a new series of questions and answers to its TSCA amendments implementation website identifying a list of "PBT Chemicals Subject to Section 6(h)."8 The seven substances the agency has identified are: 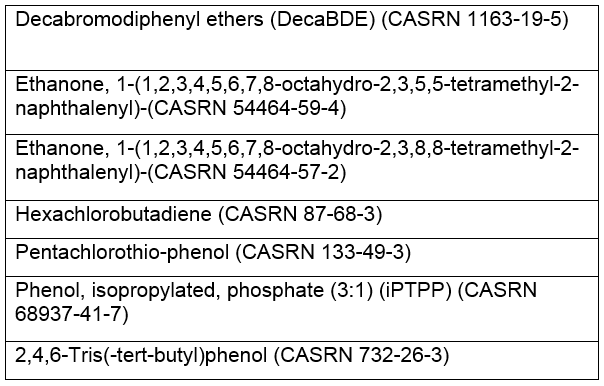 Having now identified these substances, presumably the EPA interprets them to be subject to the deadlines specified in the act which require the agency to propose TSCA Section 6(a) rules for these substances within the next three years (by June 2019). To enable the agency to prepare a proposed rule in accordance with the statutory deadline for "expedited" action, Congress directed that the EPA is not required to complete an actual risk evaluation for the PBTs the agency has determined to be covered by Section 6(h).

A rule proposed by the EPA is expected to meet the "rulemaking standard" of Section 6(a), to include restrictions or limitations to "address the risks of injury to health or the environment that the administrator determines are presented by the chemical substance," and "shall reduce exposure to the chemical substance to the extent practicable."9 The EPA is required to issue a final rule on PBTs within 18 months of the proposed rulemaking; thus, final rules affecting uses determined to present exposure and risks to human health or the environment must be issued by the end of 2021. It is also unclear how or whether the listing issued will affect or supplant EPA action on rules previously proposed for listed substances prior to the recent amendments,10 nor whether the EPA intends to expand this list over time.

Option for Manufacturers of PBTs

The tight deadline in the amendments, and the EPA's belated issuance of the PBTs list, provide little leeway as manufacturers seeking to remove PBT chemicals from the expedited action process must have filed a request for a risk evaluation by Sept. 19, 2016. Moreover, manufacturers choosing to request a risk evaluation will be required to cover 50 percent of the agency's cost of the evaluation, in accordance with a fee structure authorized by amendments to Section 26 of the act and which will not be established until at least 2017.

Additionally, the EPA will not limit the scope of a risk evaluation undertaken at the requester's expense. Thus, even if a manufacturer only produces and distributes a listed substance for a single, specific use, the EPA considers it to be within the agency's discretion to assess all reasonably foreseeable uses – and to require that a manufacturer may not later withdraw its request for a risk evaluation of a PBT (including after the scope of the risk evaluation or the fee structure have been defined by the EPA).

Two Section 6 Rules to be Proposed This Year

For a number of months prior to the amendments, and consistently ever since they were enacted, the agency has been signaling it was prepared to issue rules under Section 6 of the act – whether or not the TSCA was finally amended. Congress has made it easier for the agency to fulfill its pledge. Newly added Section 26(l) provides that for work plan chemicals for which the EPA had published a completed risk assessment prior to enactment of the amendments, the agency may issue proposed and final rules under Section 6(a) that are consistent with the scope of the completed risk assessment and consistent with any other applicable requirements of Section 6.

Consistent with this, the EPA has announced it intends to issue proposed Section 6 rules for two substances before the end of this year. Specifically for:

The proposed regulation for TCE in spot cleaning and aerosol degreasing is currently undergoing review by the White House’s Office of Management and Budget.11

The lateness of the hour at which the EPA identified the listed PBTs, the manner in which the list was shared, the agency's position requiring that manufacturers seeking a risk evaluation for a listed PBT must agree now to pay fees which have yet to be established, and the EPA’s stance that manufacturers requesting risk evaluations may not later withdraw a request collectively suggest that the agency wants to discourage manufacturers from using the self-requested risk evaluation process as a means to remove substances from the list of chemicals that must be addressed in expedited rulemakings pursuant to Section 6(h).

The agency's commitment to vigorously implementing the TSCA amendments continues to be demonstrated through its recent actions, commencing with its rapid release of the first year implementation plan and the related series of public meetings held recently by the agency. The continued emphasis on making good on the EPA's pledge to issue Section 6 rules this year, and the newly released PBT-related updates to its TSCA Q&A pages, serve as reminders that a large number of rulemakings and less formal actions will be occurring before the year comes to a close and a change in administrations occurs at the EPA.

These activities will affect not only manufacturers, but ultimately processors and users of numerous substances. These agency actions also will establish certain precedents for how the amended law will be interpreted for years to come. Stakeholders should become actively involved in these formal and informal processes to ensure that the final rulemakings reflect input from all affected parties.

Lawrence Culleen is a partner in Arnold & Porter's Washington, D.C., office where he represents clients on administrative, regulatory and enforcement matters involving federal agencies such as the EPA, the U.S. Department of Agriculture, the U.S. Food and Drug Administration and the Consumer Product Safety Commission. He previously held positions at the EPA serving as a manager in various risk-management programs which oversee pesticides, chemical substances and biotechnology products.

Camille Heyboer is a legal resource assistant at Arnold & Porter in Washington, D.C.