On March 7, 2014, the Federal Trade Commission (FTC) announced that it had won a $2.2 million judgment against health food marketer Wellness Support Network, Inc. (WSN) in federal court. The FTC first took aim at two WSN products -- the "Diabetic Pack" and the "Insulin Resistance Pack" (collectively, "health packs") -- in October 2010. The FTC alleged that WSN's claims that the health packs would prevent or treat diabetes were deceptive because they were not supported by adequate scientific proof and WSN's claims about the amount of proof it had were false. In support of its allegations that WSN made disease treatment and prevention claims, the FTC didn't rely just on the ads, but also cited WSN's use of keywords, metatags, and Google Adwords -- such as "diabetic cure," "remedies diabetes," and "diabetes treatment" -- to increase the prominence of WSN in Internet search results.

On February 19, 2014, a federal judge in the Northern District of California agreed with the FTC, entered a $2.2 million judgment against WSN and its principals, Robert and Robyn Held. The court barred WSN from making any claims regarding its products' suitability for diabetes treatment. The court accepted the opinion of the FTC's expert that WSN's disease prevention and treatment claims should have been, but were not, supported by consistent results from well-conducted controlled, randomized, and double-blind human clinical studies with statistically significant results. The court's opinion doesn't state how many studies are required, but the implication is that it's at least two. Furthermore, the court noted that although studies supported the efficacy of the individual ingredients in the health packs, no trials had ever focused on the health packs as a whole. The court expressly rejected the defendants' attempt to "extrapolate" health benefits from the individual-ingredient trials to the multi-ingredient health packs. 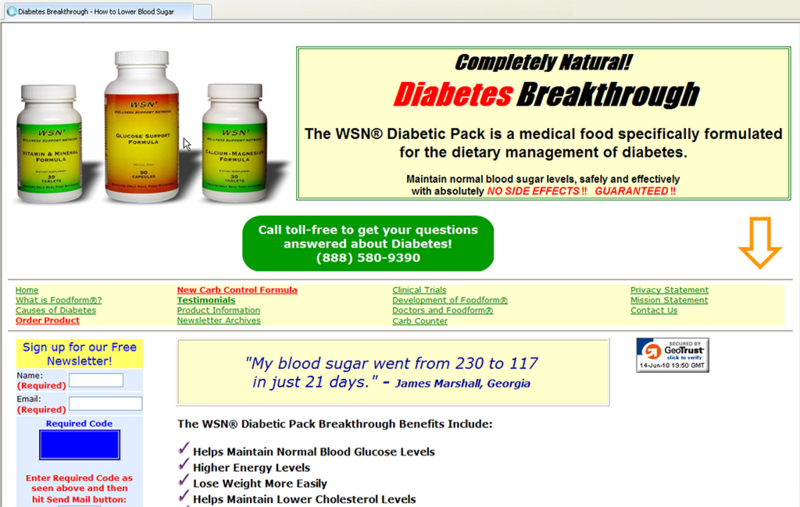 Individuals Robert Held and Robyn Held, WSN's principals, were also held jointly and severally liable for the $2.2 million judgment. The court found that both principals had been "at least recklessly indifferent to the truth or falsity of [WSN's] representations." Robert Held was liable for drafting advertisements that suggested that the health packs' effectiveness was supported by scientific studies, when he actually developed the products based solely on his own internet research. Robyn Held was also held liable due to her role in running the WSN company and crafting the advertisements, even though she played no role in formulating the heath packs or verifying their purported benefits.

The case represents another victory for the FTC in its ongoing effort to ensure that medical claims in advertisements can be properly substantiated. Manufacturers and marketers alike should take special care adequately to substantiate their products' health claims, particularly because FTC scrutiny in the area is likely to continue.